Quotes of the Day...

- "The secret of success is sincerity. Once you can fake that, you've got it made." - Jean Giraudoux

"Don't anthropomorphize computers - they hate it." - Anonymous
Posted by Unknown at Saturday, October 31, 2009 No comments:

Windows automatically backups certain area of your operating system, under different conditions. These backups are called Restore Points, and are generally triggered when you make some kind of change to the OS, such as installing a new program or driver.

I don't recommend modifying this setting, but you may need to depending on the circumstances such as you're running low on disk space.
In the list under Protection Settings, you can see which volumes have this feature enabled. You can also click on the partition that you want to adjust, and press the Configure button. A new dialog will open, and present you with a slider that you can use to change the the amount of storage this feature will use. 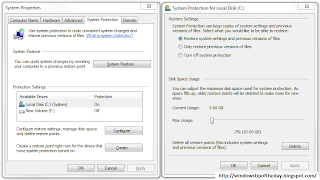 Well as the title says, Windows 7 is finally here, Microsoft released it on 10/22/09. I have been playing with the Windows 7 betas, and RC candidates for the past few months since Microsoft has released them to the public. Overall, I have liked the experience.

I have to admit I was worried about compatibility with one of my favorite games, but it ran like a champ even on the betas. I didn't do extensive compatibility checks , but I have only had issues with one piece of software, and one web site (which was DRM'ed and didn't recognize Windows 7).

One of the biggest changes you might first see is the new taskbar, and how you get live previews of all the Windows you have open. The second thing you might notice is that you don't get all those UAC (User Access Control) confirmations. Microsoft has made several changes and enhancements under the hood (or in the Kernel) to improve the overall OS.

So far the response in the press and in the blogosphere has been really positive, its gotten a lot of great reviews. I do see the occasional pundit article where someone will take a bug, or security flaw and blow it out of proportion (IMHO). Overall, I would highly recommend the OS to just about anyone, including Linux and Mac OS X users a like.
Posted by Unknown at Saturday, October 24, 2009 No comments:

It's been a several months since I last posted anything online. I have taken a hiatus from posting in my blogs to explore new hobbies.

Although with Microsoft releasing Windows 7 soon, I think this is a good time for me to start writing again. I am not sure if I will post a new tip everyday in this blog like I started out doing, but I will publish something as often as I can.

Check out all my blogs: